Kevin McCloud - Ambassador for One Tree Per Child

About ‘One Tree Per Child’

‘One Tree Per Child’ wants to have every child planting one tree as part of a primary school activity. If your school or council wants to get involved, this site will show you how.

We are rolling out ‘One Tree Per Child’ in two ways.

In addition to working with councils, we also work with local tree planting groups and community organisations. These organisations can provide invaluable help to schools.

The project has been started by Olivia Newton-John and Jon Dee, the original founders of National Tree Day. Our aim is to get millions of children planting millions of trees. 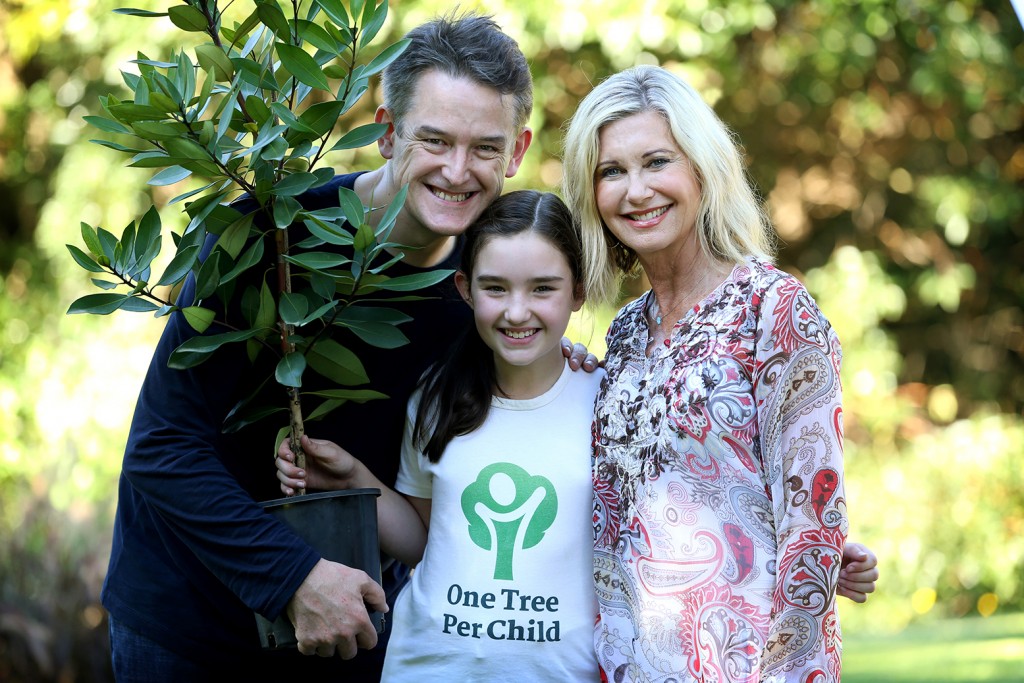 Jon Dee, Estelle Dee and Olivia Newton-John – the Founders of ‘One Tree Per Child’.

Where is the programme being rolled out?

The great news is that by April 2016, we all achieved the target by planting 39,000 trees! Check out their Facebook page and see our media release where well-known stars congratulated the kids on achieving the result. 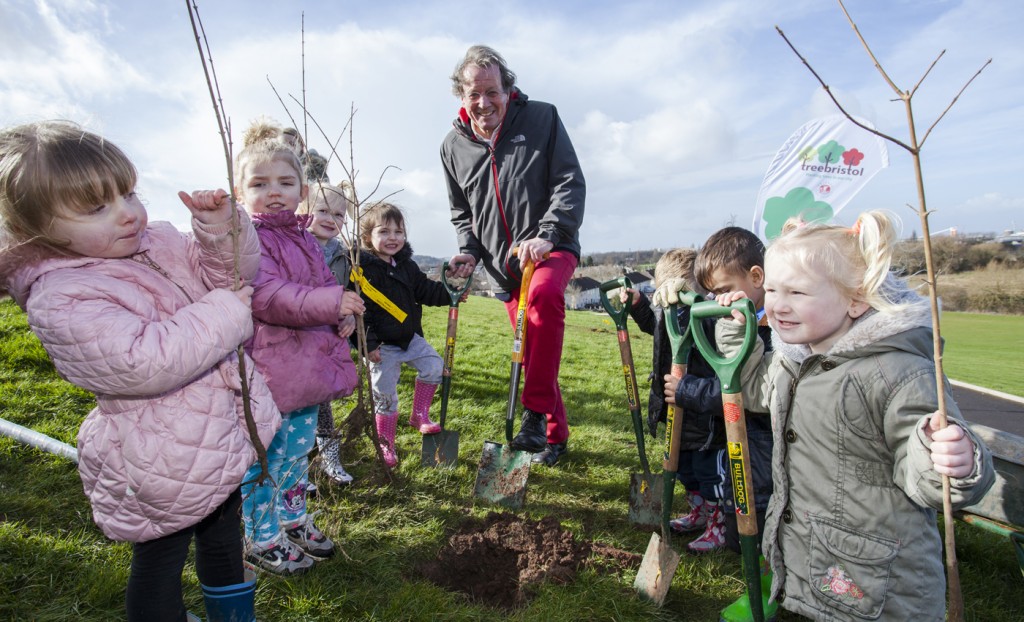 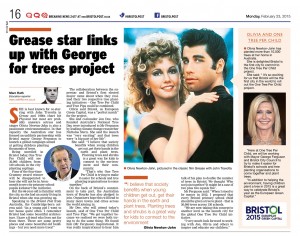 The launch of ‘One Tree Per Child’ received very positive coverage in the Bristol Post (click to view the full image).

The launch of ‘One Tree Per Child’ in Australia

On June 5th, ‘One Tree Per Child’ was launched in Australia by DoSomething in partnership with all 20 News Local newspapers in Sydney.

The launch at Bondi Beach was attended by Prime Minister Malcolm Turnbull and Minister for Environment Greg Hunt. Minister Hunt who announced that the Australian Government was giving ‘One Tree Per Child’ $300,000 to fund the first 100,000 trees for the project.

To mark the occasion, children from the Blue Mountains, Bourke and Bondi Beach joined forces to plant trees by the beach.

Waverley Council and Mayor Sally Betts hosted the launch. Together with Bourke Shire Council, Waverley Council have passed resolutions to implement ‘One Tree Per Child’ with the primary schools in their communities. From day one, trees will be planted by children from Bondi Beach right through to the back of Bourke.

In Australia, the project will primarily be rolled out in partnership with local councils. In total, 6 councils have already got involved with One Tree Per Child. Where councils choose not to get involved, we will work with local tree planting organisations and community groups to ensure that primary schools get the support they need.

Once we’re successfully underway in Australia and the UK, our aim is then to roll out ‘One Tree Per Child’ to other countries.

“Having tens of thousands of children involved in tree planting will make Sydney a wonderful role model. If other cities follow Sydney's example by planting one tree per child, millions of trees could be planted around the world.” - Lord Stern, Patron of One Tree Per Child

Who started One Tree Per Child?

‘One Tree Per Child’ has been started by Olivia Newton-John and Jon Dee, the original founders of Australia’s highly successful ‘National Tree Day’.

During the 12 years that Olivia and Jon fronted ‘National Tree Day’, over 10 million native trees and shrubs were planted across Australia and hundreds of thousands of children were involved (you can see Jon and Olivia talking about the ten millionth tree in this Tree Day video: jondee.info/tree-day).

The initiative has been co-founded by Estelle Dee, Jon’s eleven year-old daughter. She’s a passionate tree planter who has planted over 200 native trees. 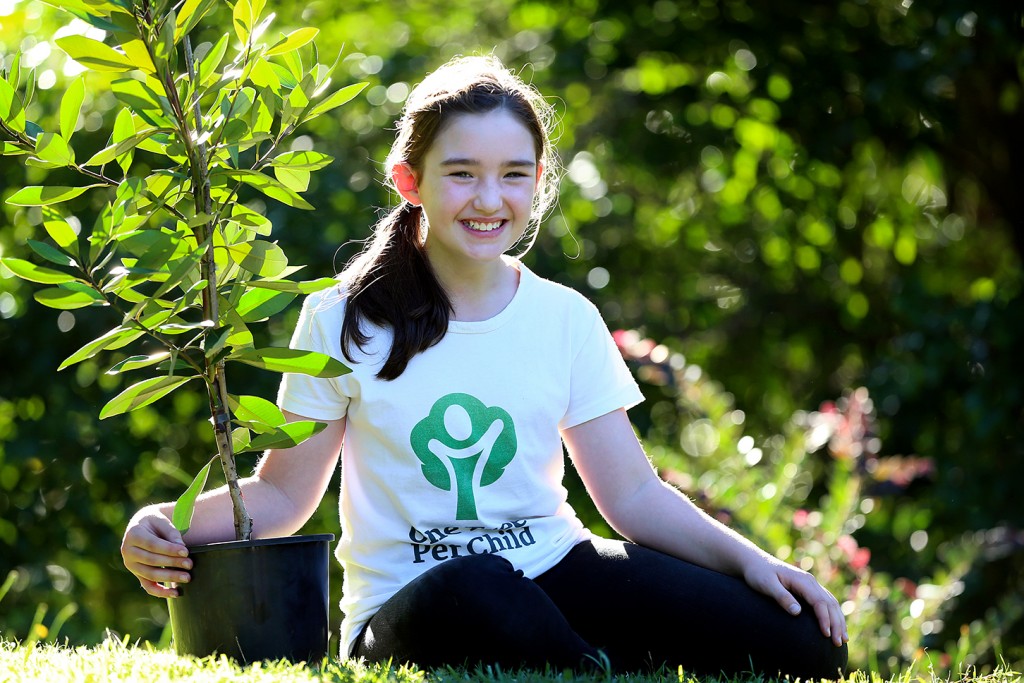 Estelle Dee is the co-founder of ‘One Tree Per Child’.

‘One Tree Per Child’ is administered internationally by the Australian DoSomething charity. 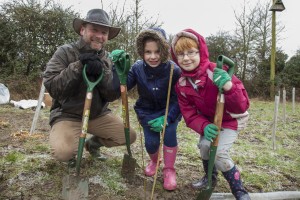 Get your school involved!

When a child plants a tree or a shrub, it doesn’t just help the environment and wildlife. It can also have a really positive impact on the child and their community. That’s why it’s really important to get your primary school involved!

There are many benefits to having our children planting trees.

The benefits a child gets from planting a tree

“I believe that society benefits when young children get out, get their hands in the earth, and plant trees. Planting trees and shrubs is a great way for kids to connect to the environment and their community.” - Olivia Newton-John 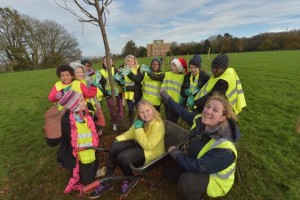 ‘One Tree Per Child’ is being rolled out in partnership with councils in the UK and Australia.

Bristol City Council was the first council to roll out the project in the UK. Thanks to them, there is no cost for Bristol’s schools to take part in ‘One Tree Per Child’. We would like Australia’s councils to take a similar approach.

Waverley Council staff have been meeting their local primary schools and have offered to give them free help with their plantings. From day one of the initiative, trees will be planted by children from Bondi Beach right through to the back of Bourke.

In Australia, the project initially aims to recruit all councils throughout Sydney and the Central Coast. We are doing this in partnership with NewsLocal newspapers. Then it will roll out to other councils and communities around Australia.

To sign up your council or to ask us more questions, please click on the menu and fill in the contact form. We do hope that you can get involved!

‘One Tree Per Child’ is fortunate to be backed by some very eminent people both in Australia and the UK. Click on the photos to find out more about the patrons and ambassadors who have helped us to get the project underway.

One Tree Per Child launches in Bristol

Bristol is the European Green Capital for 2015. It is also the first city in the world to roll out the ‘One Tree Per Child’ initiative.

With 36,000 pupils at 130 primary schools, Bristol is the perfect city to launch the project. Led by Mayor George Ferguson and his team at Bristol City Council, ‘One Tree Per Child Bristol’ has already been getting trees in the ground.

Here are some of the plantings – we have many more planned when the UK tree planting season starts in November 2015. 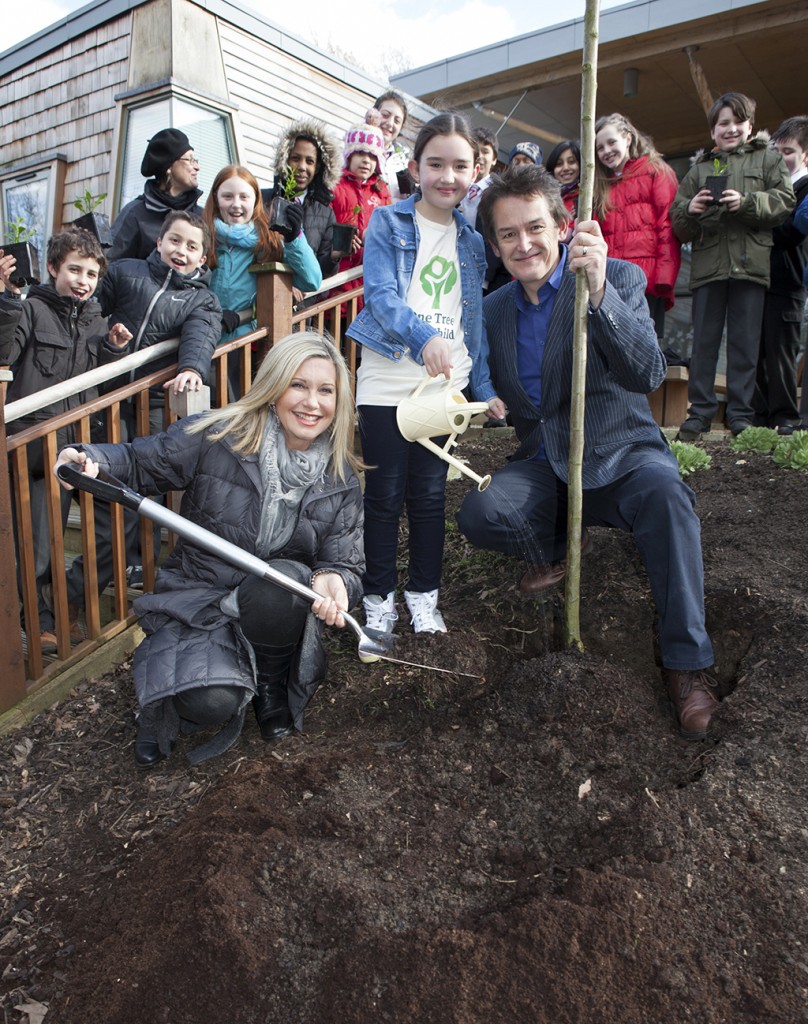 Estelle Dee planting the first ‘One Tree Per Child’ tree in Hyde Park London with Olivia Newton-John and Jon Dee. A big thanks to the Isis Education Centre and Royal Parks.

The first tree ever planted for ‘One Tree Per Child’ was planted in London’s Hyde Park. Thanks to Royal Parks, Olivia, Jon and Estelle planted a hawthorne tree at the Isis Education Centre in Hyde Park. We were joined for the planting by local school children and ‘One Tree Per Child’ ambassador Pat Cash (the co-Founder of DoSomething in Australia).

Thanks for contacting us!

If your school or council want to sign-up to ‘One Tree Per Child’, then we’d love to have you on board! If you have any questions, please use this contact form to get in touch with us.

One Tree Per Child